Stay up-to-date on what’s happening, current news surrounding the organization, and around the world. We will keep you informed. Sign-up to receive news in your inbox.
for immediate release
By: California College of Ayurveda
released by Dr. Marc Halpern, Director

The California College of Ayurveda will be offering Yoga Nidra for those affected by the River or Dixie Fires as well as those who are carrying trauma from past fires such as the Camp Fire. Firefighters as well as the affected public are invited to attend. This is a free program and a community service offered by the California College of Ayurveda.

CCA Yoga Nidra for Fire Victim Support is an 8-session program. Each session is 90 minutes and includes a group practice and a follow up circle to discuss the experience. Registration is required with a phone number to call. Participants can call the front desk (530) 478-9100. It is not necessary to attend every session or participate in the discussion. The program may take place indoors (socially distanced) or outdoors at CCA depending upon the group size and the state of Covid in the county. More information will be provided upon registration. Participants should bring a pillow, a yoga mat (we have some extras) and any other props to help them be comfortable.


This program is co-sponsored by The HeartWay, Warmth Yoga Studio, and In-Balance Wellness.

We give little thought to death and dying when we’re young. Then as we grow older, sooner or later we’re confronted with the deaths of people we love – family and friends.

So how do we come to terms with the stigma and fears surrounding death and difficult end-of-life decisions?

Thanks to the growing popularity of Death Cafés, people are choosing to get together to discuss death . . . usually over tea and cake.

What is a Death Café?

Death Cafes are not necessarily held in a café. They’re free discussion groups with no particular agenda, and are not a grief support group nor therapy session. The goal of a Death Cafe is to increase one’s awareness of death and dying with a view to helping make the most of the life you are living now.

And, tea and cake are served to create a nurturing and supportive environment.

These non-profit Cafes are held in a variety of places – homes, libraries, senior centers, community centers, restaurants, or other pop-up locations. Each gathering is respectful of different ideas, religious and spiritual beliefs.

The first Death Café was held in John Underwood’s house in London in 2011. (He died in June 2017, but his mother and sister carry on his work.)  The idea quickly became popular and more than 6,000 cafes have been offered in 56 countries since 2011.

On a recent Monday afternoon, I attended a Death Café held at a Senior Center near my home. The group was started close to three years ago by Andrea Deerheart, Ph.D., founder of The HeartWay, a nonprofit organization that helps guide people and families through end-of life transitions. The assistant facilitator for this group, Lori Osborn, explained this was going to be a smaller-than-usual turnout (due to it being a holiday week), as a total of nine women sat down in a circle of cozy chairs, when they usually average 20 people.

This isn’t just for older adults. Participants ranged from ages 28 to 95 years old.
‍
Multigenerational families attend. A “regular,” Julianne, came with her 60+ year old daughter, Ava. Loraine arrived with her two adult granddaughters. Another woman commented on how special it is to share end-of-life discussions with family members.
‍
Tea (and cold water) was served . . . but not cake! Instead, there were three types of chocolate candy treats, which no one complained about and suited the chocoholic in me just fine.
‍
The discussions weren’t depressing nor morbid. There were moments of comfortable silence, too. No one was pressured to speak and the conversations grew organically from us and were not facilitator-led. There was even laughter when one woman ended her description of her life-after-death vision with the pronouncement, “You are going to be watched!”
‍
What We Talked About

After we briefly introduced ourselves, the nonjudgmental 90-minute discussion began as one participant asked for an expert resource to get her “papers in order.”

That practical Q&A led into deeper topics:
‍
The importance of leaving some type of legacy for our descendants of personal family stories whether captured in written, audio or video formats. Even one’s struggles in life should be recorded because there are lessons to be learned from those.
‍
Fear of dying may intensify when you get close to the age at which your parents passed away, especially if they died at a younger age.
‍
How our society overall keeps us away from death and dying. One woman commented she grew up on a farm with cattle, chickens and horses, and death was a normal part of life for her since childhood.
‍
What happens after we die? We shared ideas about possible spiritual reunions, reincarnation, eternal life and if signs are received from loved ones who have passed, such as by seeing butterflies or birds at meaningful moments.
‍
What it was like being present at the deaths of loved ones, such as parents or spouses. Do people “wait” to die for a time when they’re left alone?
‍
Why Are Death Cafes Growing More Popular?

Licensed clinical psychologist Karyn Sandburg, Ph.D, very much likes the idea of the Cafes because “there currently is not enough available to help people through loss.” Sandburg adds, “Older adults can feel isolated anyway. Often times they are losing multiple people in a short period of time. Not feeling alone and knowing others going through something similar can definitely help."

According to Deerheart, the movement is growing because:

The population is aging. Baby boomers are getting older, hit retirement age for the first time a couple of years ago, and realize they are in the second half of their lives. “If they’re having conversations with themselves about their life, their death and/or concerns, questions or ‘what-ifs,’ the Café is a perfect safe place for that,” Deerheart explains.
‍
The major shift in health care systems around the world increase people’s exploration of end-of-life options. “The cost of spending the last 72 hours of one’s life in the ICU is often exorbitant. More elders now choose to die peacefully and leave money for their children to enjoy,” says Deerheart.
‍
Older adults realize that gaining clarity about and expressing their end-of-life wishes is a gift to give children and grandchildren.  “Elders have the opportunity to teach their children how to age and how to die, because no one is teaching that,” adds Deerheart, “Questions to ask yourself are, ‘What did your parents share with you about dying? What do you wish they had shared with you?’”
‍
Boomers created the Death with Dignity Acts which stimulate even more conversations.
‍
How to Decide If It’s for You

Sandburg recommends giving it a try. “One doesn’t know just through thought if something will work or not. Doing or trying it out is a more reliable source of information. When dealing with grief, we can often talk ourselves out of doing many things. Lots of small steps gets us somewhere new, while just thinking and waiting usually doesn’t. Going with a friend might make it more comfortable, at least the first time.”

A Death Café may not be for everyone. But, if you decide to go, arrive with the knowledge you will be heard, honored and respected for your point of view — and thanked for bringing your perspective to the group.

Deerheart sums it up, “The Death Café is a lovely vehicle for having those important conversations about end-of-life and a place where people have the opportunity to hear their voice as well as others. Every Café is unique, powerful and transformative. The conversation around death is really about life. Bottom line, it’s about love.”

Originally published on Senior Planet from AARP
for immediate release

Laguna Beach, CA:  At its October 20th City Council meeting, the City of Laguna Beach honored a local nonprofit by proclaiming November 1, 2015, as The HeartWay Day.

Dr. Andrea Deerheart, The HeartWay’s founder and president thanked the City Council for its proclamation and described the nonprofit organization’s services, stating that “The HeartWay provides supportive spiritual, emotional, and pragmatic services for end-of-life care, with no costs to families, and has helped hundreds of families more easily move through this difficult time.” She also announced the nonprofit’s inaugural Dia De Los Muertos (Day of the Dead) Celebration of Life event on Sunday, November 1, 2015, and invited Council Members, City staff, and the public to attend.

{Add name of client} shared {his or her} experience of receiving services through The HeartWay and the help it provided during {add whatever is appropriate here with a quote if possible}.

The HeartWay’s Dia Del Los Muertos Celebration on November 1, 2015 from 4:00 to 7:00 PM at Annaliese Academy in Laguna Canyon will be a well-supported gathering where people will join together to celebrate the theme of embracing life and honoring death. It will include a beautiful array of art, music, dance, food, libations and ceremony. An artists’ reception will precede general admission to the event.

For more information, please contact Andrea Deerheart at deerheart@theheartway.org  or at 949.433.8288, and visit The HeartWay at www.theheartway.org. 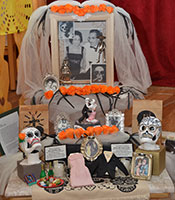 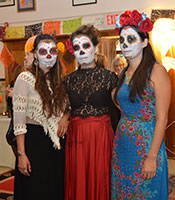 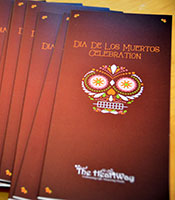 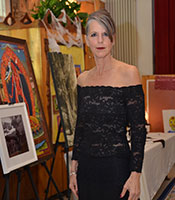 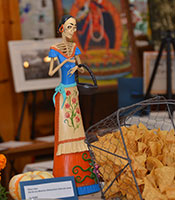